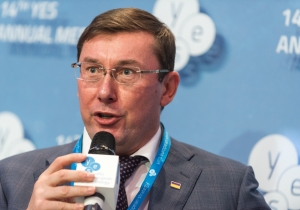 The Prosecutor-General's Office of Ukraine is planning neither to arrest nor to extradite Mikheil Saakashvili, Ukrainian Prosecutor-General Yuriy Lutsenko said at the 14th Yalta European Strategy Annual Meeting organized by the Victor Pinchuk Foundation.

"As prosecutor-general, I will tell you loud and clear: Saakashvili will not be arrested in this instance. He cannot be extradited from the country for as long as he holds a permanent residence permit or other documents he presented," he said.

However, he added, those who were involved in Saakashvili's border breakthrough are facing criminal punishment.

"Those who brought him across the border will face problems and a criminal prosecution but will not be arrested. Those who attacked Ukrainian border guards will face a criminal prosecution and will be arrested. They have to spend seven years in jail to make sure all politicians understand that you can and you should stage rallies but you cannot attack soldiers and officers!" he said.

He added that if Saakashvili believes that he was stripped of Ukrainian citizenship illegitimately, he should take his case to court.

"All over the world if people feel that their rights were violated by the state, they go to court… Mr Saakashvili, if you hear me, take a court action!" Lutsenko concluded.