Peace can only be achieved with willing partners – Tony Blair 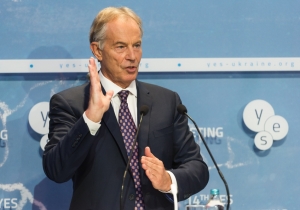 Peace can only be achieved if all parties involved want peace, the former Prime Minister of the United Kingdom (1997-2007) Tony Blair believes.

"Peace may be achieved only with those who want it: with people who do not view negotiations as a trick or a gambit or a way to buy time in order to prepare for the next phase of conflict", Blair said during the Shimon Peres Peace Lecture at the 14th Annual Meeting of Yalta European Strategy (YES) organised by the Victor Pinchuk Foundation.

"When you look at the resolutions submitted by Russia to the UN, it is important to understand whether it comes from a partner who seeks reconciliation or it is a tactical maneuver?” he cautioned. “Partnership needs to have strategic depth in order to last", he continued.

Another crucial condition to establishing peace, according to Blair, is fair principles both parties and a fair organisation and structure going forward”.

The former Prime Minister of the United Kingdom also stressed: “we make peace with enemies, not with friends” before suggesting that the peace process is always difficult as it is not made between politicians but between people.

Aleksander Kwasniewski
President of Poland (1995-2005), Chairman of the Board of YES, 8th Yalta Annual Meeting, 2011
«To remain the global leader, the European Union should enlarge»