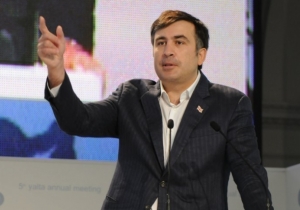 Radical reforms within "Young Democratic States" are impossible without overcoming the cultural stereotypes, kept as a heritage of the Soviet times. This has been stated by Mikheil Saakashvili, the President of Georgia, in his speech on the Plenary Session "Building Democracy and Market Economy in the Black Sea Region" of the 5th annual Yalta European Strategy (YES) summit.

Mikheil Saakashvili mentioned that within the four recent years Georgia has achieved a serious advance in economic and social spheres. According to his words, industrial production rate growth today amounts to 12-13% per annum; the poverty level has been decreased from 50% down to 17%. The foreign investment volume in Georgian economy amounted to 2 billion US Dollars within the previous year; the country hopes to receive 3 billion US Dollars this year.

The secret of this success, according to Saakashvili's opinion, lies in the radical steps of the authorities. In particular, the President of Georgia mentioned reforming the police, reduction of government personnel, radical de-regulation (the government reduced the number of requested business licensing documents by 90%), termination of customs tariffs, allowing to increase the budget profits by 11% and taxation profits - by 55% already by 2004.

At the same time, the key factors promoting success of the reforms are cultural and mentality changes; specifically, Mikheil Saakashvili mentioned overcoming the nepotism in the system of higher education and implementation of strict approach to traffic regulations control.

These changes caused resistance from the part of opposition. "The certain forces in Georgia do not want reforms", mentioned Saakashvili. "They say the government declaims Christianity and traditional people's values. Although, by these values they understand corruption and nepotism, which is not compatible with democracy as we see it. These are the heritage of the Soviet times".

Mikheil Saakashvili is confident: without democracy, it is impossible to reach the economic stability in the country. At the same time he has admitted that Georgian authorities sometimes use quite rough methods in reforms' implementation. "The government might be tough and might sometimes have rough reaction to such things. We might possible lose support because of that. Still, the main thing for us is to see the positive consequences of the reforms for the country", he stressed.