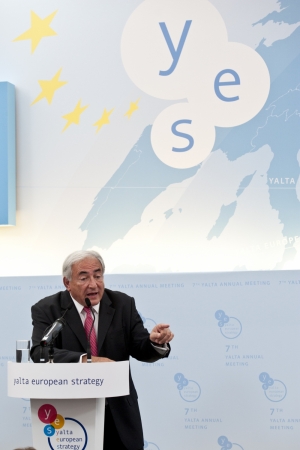 The world economic growth has started. Although its rates are not supposed to be high, the forecast for the years immediately ahead seems to be quite positive on a global basis. However, serious global economic risks continue to exist as yet. Dominique Strauss-Kahn, the Managing Director of the International Monetary Fund claimed this during his joint session with Mykola Azarov, the Prime Minister of Ukrain, that has opened the second 7th YES Yalta Forum plenary day.

“The economic rise itself is insufficient for an ordinary person. When it is back it should offer workplaces. In the time of crisis the world has lost about 30 million of workplaces, in the coming years another 400 million of people may find themselves on the labor market. The economic growth shouldl solve the employment issue” – he highlighted.

However, mounting unemployment is only one of those risks which the world economy faces today. The second one, being equally important, is related to indebtedness issue. “We are concerned not only with sovereign risks, the governments’ debts – we will solve this problem. First of all, the private economy debts are a matter of great concern to us. Because this is the cause of the crisis”, - D.Strauss-Kahn brought it into focus, having added that today one of the serious tasks lies in a change to the world financial system. “We will change the financial system that will support the real economy”, - he claimed.

Finally, the third global risk, according to the IMF Director, lies in the weakening of cooperation between the countries on a global basis. It is cooperation at the very start of the crisis, D.Strauss-Kahn reminded, that has helped us avoid reoccurrence of the Great Depression in the ‘30s.

“There is a moral we have drawn from the crisis. We have managed to avoid reoccurrence of the Great Depression owing to that the countries of the world have been able to employ the same policy at the same time. They have improved the monetary policy and given an impetus to their economies”, - D.Strauss-Kahn said. However, today, when the greatest dangers went behind, many countries cease thinking globally and tend to protect the national economies to the detriment of others. It refers to the governments’ striving to devaluate the national currency in order to promote export. The similar policy has been named as a “currency war” since many countries are employing it simultaneously.

“History gives us a lesson to the effect that if you start making such a war all the others start acting in the same way. And your struggle does not give the results then. There are no national solutions to the global issues. We are to forget bygones and make plans for future. We need cooperation between the countries in the economic sector – at least for several more years”, - Dominique Strauss-Kahn emphasised.