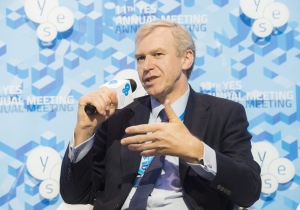 Decentralization as it is does not create peace, but it can be applied to address various conflicts, stated Yves Leterme, Prime Minister of Belgium (2009-2011), Secretary General of International IDEA, at the session “Strength via Decentralization” at 11th Annual Meeting of Yalta European Strategy (YES) on Saturday in Kyiv.

“Decentralization is not the creator of peace, but it can be used to address various conflicts. The precondition underlying decentralization is peace in the sense that all people in Ukraine and everyone sitting at the negotiation table accept and are ready to accept the things agreed on within the entire territory”, - stated Leterme.
Another panelist Refat Chubarov, Chairman of the Mejlis of the Crimean Tatar People, asserted that even now, before the RF returns the annexed Crimea, Ukraine should think about the decentralization in the peninsula, where the rights of indigenous people – Crimean Tatars – have not been documented so far. “Dealing with the ways to develop Ukraine upon recovery from the crisis – I believe this is when the Crimea has been returned – we are now to draft the forms of decentralization for the Crimean situation, it is essential that we consider the lessons learnt in some European countries”, - stated Chubarov.
Serhiy Taruta, Head of Donetsk Regional State Administration, proposes to use the Poland’s experience, where in principle a unitary country demonstrates the features of a federative state. Taruta added that more powers could be provided very soon to the two regions in the east of Ukraine and to keep the balance – the two in the west.
Volodymyr Hroisman, Vice Prime Minister of Ukraine, who also took part in the session notes that so far the public administration system is centralized and oriented to satisfy the needs of bureaucrats. “Decentralization is not an end in itself today, we need to build a proper system of governance. It is impossible to build a person-oriented system without participation of those persons”, - believes Hroisman.
Roger Myerson, Professor of Economics, University of Chicago; Nobel Memorial Prize Laureate in Economic Sciences (2007), assented to the Vice Prime Minister’s opinion. “I became interested in your country as it seems there are problems in your constitution, the power is too centralized. Political decentralization would be useful for the people of Ukraine”, - emphasized Myerson.
Another panelist - Timothy Snyder, Professor of History, Yale University – is sure if the Ukraine-Russia conflict is stopped, the decentralization will make the Ukrainian state powerful.