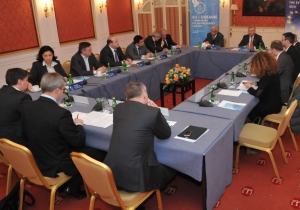 On November 10, 2011, during a visit toWarsaw, the Board of the Yalta European Strategy (YES) discussed prospects ofUkraine’s integration with the European Union and the role of Poland, currently holding Presidency in the EU, in the negotiations on the EU-Ukraine Association Agreement.

Donald Tusk, Prime Minister of Poland: “Poland has always been dedicated advocate of Ukraine’s European aspirations. And this is a consensus strategic dimension of Polish foreign policy.”

Aleksander Kwasniewski, Chairman of the Board of YES: «Poland will undertake all possible necessary steps to finish its presidency in EU by signing EU-Ukraine Association Agreement in December”.

The meeting participants emphasized that the upcoming EU presidencies of Cyprus and Denmark may not be as “emotionally engaged” with Ukraine as Poland is, and there may be less inclination to return to the EU-Ukraine Association Agreement if it is not initiated by the end of the Polish EU presidency.

Speaking at a working dinner, Timothy Garton Ash, Professor of European Studies, University of Oxford, noted that Ukraine's accession to the EU is just as important for the EU itself as it is for Ukraine, since the rapid growth of Asian countries makes it necessary for the EU to reinforce its geopolitical and geo-economic position to strengthen its influence in the world.