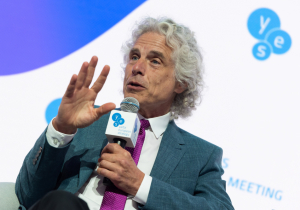 The struggle for citizen’s happiness requires a thoughtful and careful approach by state, says Steven Pinker, Professor of Psychology at Harvard University at the 16th Yalta European Strategy (YES) Annual Meeting, “Happiness Now. New Approaches for a World in Crisis”, organised by the Victor Pinchuk Foundation.

“Government cannot improve happiness on their own, they need to work holistically. If government undertook this task alone, it is dangerous. Additionally, individuals perceptions of happiness, and what it means to be happy, vary. A government cannot be expected to decide what makes people happy, however the state may assume responsibility for some social goods: mental health, green space and transport. If these are built out in the right way, this will result in an improvement of wealth and prosperity, and consequently, an improvement in the level of happiness,” he said.

In turn, Jeffrey Sachs, Director of the Center for Sustainable Development at Columbia University, said that people across the world expect states to make their life happier.

“People expect a government to make their lives happier. It is curious that even in the US, where liberal or libertarian economic policy prevails, people mostly answer that way. We want governments to promote happiness. However, there are at least two obstacles: firstly, governments, as a rule do not know how to go about that. Secondly, most governments haven’t even thought about it!” he said.

Sachs added that even a wealthy economy doesn’t mean that it results in a high happiness index. “In the US we have become a very rich, yet unhappier country. On average the US have an income of $65 thousand per capita, yet the number of suicides and neuroses is growing. What does all that money provide then?”  the Professor asked.

Sachs added that pursuing money alone is not the path towards happiness. “It is important that governments ultimately start caring about outputs that are not just about the conventional economic indexes.” he summarised.