16th YES Annual Meeting: the headlines from day one 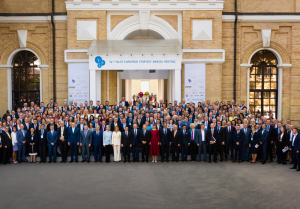 President Zelenskyy called on world leaders to continue to enforce sanctions against Russia, saying sanctions are a form of tax you pay to bring about peace.

Day one of the event was opened by YES Founder Victor Pinchuk and recently released film director Oleg Sentsov, with the latter calling for President Zelenskyy to do all he can to bring other Ukrainian Prisoners home.

Sentsov, who was released from a Russian prison earlier this month, along with 34 other Ukrainians, urged the President to do more to help those still captive in Russia, Donbas and Crimea. Zelenskyy responded that he would “do his very best to see all Ukrainian captives released as soon as possible”.

This year’s YES theme is “Happiness Now. New Approaches for a World in Crisis" and Victor Pinchuk used his welcoming remarks to announce the results of The Global Happiness & Political Attitude Study, bespoke research initiated and directed by himself. A key finding showed that Ukrainians, although the most pessimistic at present, were most optimistic overall about the future.

Zelenskyy, who was joined by two other Presidents at the morning speech - President of Estonia Kersti Kaljulaid, and President of Finland Sauli Niinistö, discussed whether and how governments and policy makers across the globe could improve national happiness.

Attendees then heard more on the topic of happiness from a number of high profile speakers including historian Yuval Harari, artist Olafur Eliasson, psychologist Steven Pinker and comedian Jon Gnarr, among others.

The forum’s first day focused on the global challenges, the global political situation and the relationship between Europe, Russia and Ukraine. Crimea, unsurprisingly, was a key topic with Pinchuk arguing that the Crimean people will be drawn back “like a magnet” once they realise that reforms are under way and see how the Ukrainian people were thriving.

Zelenskyy was more outspoken on how Ukraine may bring back “our territories” arguing that “The most important weapon is sanctions”, whilst later in the day former P.M of Qatar, H.E Hamad Bin Jassim bin Jabor al Thani, argued that dialogue was essential to end the conflict between Russia and Ukraine. He argued, that just like Qatar and Iran, Russian and Ukraine will always be neighbours so they should communicate.

Corruption was also a key theme of day one of YES 2019, with universal acknowledgement that many reforms are still needed. Zelenskyy added that “People should already see the changes now with new anti-monopoly laws and corruption committee’s being implemented.”

President of Estonia, Kersti Kaljulaid agreed with the optimism in the air, stating: “I am sure that Ukraine will be free of corruption and grow their economy, while supporting all citizens at the same time.”

Moving to global issues, Yuval Harari gave a stark warning that ecological collapse is a reality and we have very little time left to avert a catastrophe. “We need global cooperation as no one country can do it alone”, he said. No one country will give up their economic growth and competitiveness for the environment or climate change so global leaders must all make real efforts to innovate and adopt new eco-technologies that maintain economic growth without ruining the environment.

Harari also warned that that AI and new technologies are going to be one of the biggest challenge to humanity in the 21st Century, saying they are likely to create huge inequalities, with huge wealth in countries with high tech clusters and greater poverty in developing markets.

Some of the other headlines coming out of the day’s debates were:

“The world is more at peace than it ever has been. Today, more people die from suicide than from war. You are now your worst enemy.”

“You have to give people designs for the future so they can see and feel how tomorrow will be better than yesterday.

“We will have to explain to our grandchildren why we spent an incredible amount of time and money on #Brexit, when we could have been spending it on the very real threat of climate change.”

“I knew that there was a story in the 1986 Chernobyl explosion but I didn't expect there to be so many stories.”

“We are not fulfilling our collective responsibilities. The international order is crumbling. There is unpredictability..”

“We surveyed people across the world and the single most important thing for Ukrainians is the happiness of their children.”