15th YES Annual Meeting: the headlines from day one 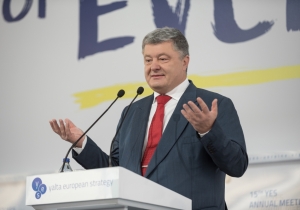 President Poroshenko and Victor Pinchuk open the day’s discussion – calling for Ukraine and the West to carefully assess all the risks and opportunities the future brings.

The theme of this year’s event, organised by the Victor Pinchuk Foundation, is “The Next Generation of Everything”.

Making the opening remarks Mr Pinchuk said, “The future cannot be lenient towards those who do not care about it”. As he discussed the big issues facing Ukraine today Mr Pinchuk, who believes passionately in the power of art to connect people with the problems the word faces, unveiled a diptych painted by  Japanese artist Takashi Murakami especially for Ukraine entitled ‘Ukraine: The War and Peace’.

In unveiling the new work, Mr Pinchuk said that artists often see the future better than politicians, but made the point that although they are good at seeing it, those who map the way to it are the scientists, analysts, politicians and participants of this conference.

Making the keynote speech, President of Ukraine Petro Poroshenko affirmed once again that his vision of UKraine is as the eastern stronghold of NATO’s common security system. “Our European and Euro-Atlantic aspirations should be considered in a broader international and European context”, he said. “It is not that we need just the EU, we also need NATO. In the same way, they need us.”

Poroshenko went on to say that the united Europe project may only be completed with Ukraine. “Ukraine is a euro-optimistic nation, it’s people have a unique belief in Europe.”

Turning to the internal issues the country faces the President called on all Ukrainian politicians to drop the promise of populism for the sake of a stable future.

He told them, “My personal experience taught me that it is important to be very careful and responsible about what you promise people. Over four years ago, I said that the antiterrorist operation (ATO) would take hours, not months. I would like to say this once again, I am sorry for creating inflated expectations….I am calling for real action programmes, not fantastic promises of manna from heaven, promises of the moon, sunshine and rainbows.

Some other headlines coming out of the first day’s debate include:

“NATO’s primary task in cooperation with Ukraine is to support and assist with the implementation of fundamental reforms.”

“The US Founding Fathers – and this will be a good lesson to young democrats in Ukraine – were very cautious about the executive power.”

“The current US administration has made a strategic mistake in lowering corporation tax, instead of encouraging the global community to come together to agree a an internationally recognised tax system that would not force the race to the bottom.”

“Reducing inequality in people’s personal income is an effective measure to fight the “wave of populism”. It is incumbent on politician’s in Europe to make sure that Europe’s six year streak of economic growth is reflected in the income of all layers of society.”

“I believe the ability of human beings to own and profit from their own data as a fundamental human right.”

“Putin is not only the Commander in Chief of Russia, he is the Historian in Chief”,

“The problem of disinformation will get worse before it gets better.”

“We haven’t frightened ourselves enough yet (with the use of cyberwarfare) to come up with an international accord, as we did in the case of nuclear.”

“Nothing will be done to the US or other Western countries elections that won’t be done to Ukraine first”.

“Now that we see the Brexit promises will not be delivered, the sensible thing to do is to put the question back to the electorate, revoke Article 50 and not leave the EU at all”.

“In the next ten years we will be faced with three giants, India, CHina, and the US, and it will be better for medium sized companies to stick together. The EU is now less about peace and more about power”.