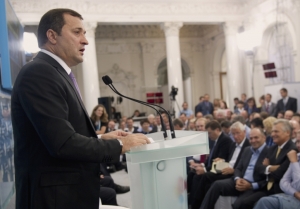 Clear prospects for membership in the European Union is necessary for Ukraine and Moldova, Prime Minister of Moldova Vladimir Filat stated in the discussion “Eastern Europe and the Role of Ukraine” at 8th Yalta Meeting of YES.

“Europe without Ukraine is hardly Europe. And without Moldova,” said the leader of Moldovan government stressing that his country and Ukraine are not competitors in the process of European integration. “Quite to the contrary, we are sure that only together we can ensure an effective integration process”.

Filat admitted that the reforms which would make our countries eligible to the European criteria in many spheres of life are necessary for the countries themselves. “We do this not for Europe, not for IMF, we do this for citizens of our countries”.

At the same time, Vladimir Filat said that the perspective of membership in the European Union is vitally important for the countries and people of Ukraine and Moldova. “This is like light at the end of the tunnel. Living in uncertainty is impossible: you just go, and what place you will reach is impossible to understand. I know Article 49 of the Lisbon Treaty in English, Moldovan, Russian and Romanian. If it helps, I am ready to learn this Article in 27 languages of the EU countries. Declaration of the European perspective will cost nothing. This will not mean you are to pay anything to us. This does not mean that someone should work instead of us. But this is a very important incentive for the country,” Filat emphasized adding that the accession to the EU is a national idea in Moldova.

“We are not talking of changing the approach as compared to those countries which have already acceded the EU. We don’t demand different attitude to our country. Tell us what to do so that the country and citizens get European values. Tell us that when we meet these criteria we will get the status,” Vladimir Filat appealed to the European Union.